Another terrific concept from local developer Brent Crawford. This time to replace the three story Swan Cleaners building in downtown Columbus at the intersection of Cherry and High St.

The building is proposed as an 11 story with 120 units and ground floor triple net retail for River South in Downtown Columbus. I have no idea how much Columbus net leased retail or restaurant space there will be.  Whatever it is, it will make us Columbus commercial real estate agents and brokers happy to have some new inventory.

The project goes before the Downtown Commission next week on September 20th. At least with the Downtown Commission the project isn’t likely to come back with the top four or five stories missing as would be the case with a few area commissions just to the north.   I suspect this one will be left intact.  To have population growth in the Columbus central business district, we need density.  In order to do that, we need to build taller.

The local architectural firm, Design group created the design. The rendering faces northwest with the two partially completed LC properties just to the north.  With this property, River South is just about complete.  That’s start to finish in eight years.

Given how tight the local commercial real estate market in High Street corridor has been over the last many years, new retail developments are leasing up before construction begins. If you have any interest, feel free to contact me, Scott Harris Realtor, at 614-905-6614. 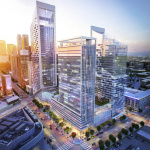 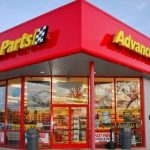