An undeveloped block within the Grandview Yard has three new buildings that are currently under construction. The 125-acre project consists of one three-story commercial office building and two residential apartment buildings that are to be constructed between Williams and Burr avenues.

The newest 88,000 sq ft office building will be called 840 Yard Street. The total public infrastructure investment for the apartment buildings, which will be known as Kipton North and Kipton South, have been reported at $152 million to date and are estimated to be $175 million at completion. The new construction will hold about 1,250 multifamily units upon its completion. Each building should hold about 223 units that are four stories tall.

The marketing director of the NRI (Nationwide Realty Investors) , Carli Lanfersiek noted a few key updates regarding these new additions. She mentioned that the near finished office building at 950 Goodale Blvd. has received a signature from E.L. Robinson Engineering, VanTrust and Carlile Patch & Murphy who plan to occupy the 34,000 square foot space.

In addition to the 13,000-square-foot Grand Event Center, there are two hotels included in the development which will be the Hyatt Place that consists of 126 rooms and a Courtyard Marriott with 135 rooms. The total residences of about 1,450 include, Wagenbrenner Development’s Homes on Pullman Way, new single family houses by M/I Homes and NRI’s 828 at the Yard condos.

I don’t think the office space has been fully leased yet so if you have questions or are interested in Grandview Yard office space, please contact me, Scott Harris at  614-905-6614 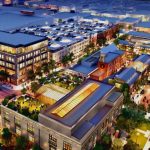 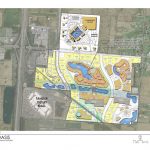