The Los Angeles area hasn’t had a NFL team for 20 years, but the new Rams arena is isn’t all that’s happening at the old Hollywood Park site. The residential and retail component of the development has been in the planning stages for over a decade.  Like most projects, it was delayed by the great recession due to the lack of construction financing.

The 238 acre Hollywood Park site was acquired by developers Wilson Meany and Stockridge back in 2005, but construction didn’t begin until 2014. The Rams arena is the newest addition to the project.  The project is expected to be completed in 2023 with a possible Super Bowl in 2020.

The development and arena will be mighty cool when flying into LA at night if you’re on one of those 1,500 flight coming into LAX daily, especially the giant billboard on top of the arena. The developers are doing everything they can to see that this will be a very special welcome into Los Angeles.

It’s likely a little early to be looking for Los Angeles net lease restaurant or retail space in the development, but if you’re interested, I’ll do what I can to get the process moving. Call me, Scott Harris Realtor, 310-473-4789 for more information. 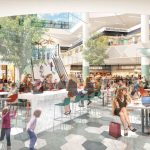 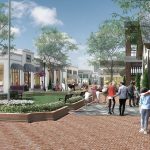